It’s a time to celebrate… again. The Ventura County Strategy Boardgamers meetup has surpassed another milestone statistic. Recently the group held its 1500th event. The group has come a long way since a few gamers met at Borders Books once a week. Now, we are meeting 3-4 times a week across 5 regular locations. Nice.

Don’t you just love it when software cannot count properly? According to Meetup, the VCSB meetup group had met almost 1500 times since the group was started by Adrian late in 2009. According to one page on the VCSB Meetup site the count was 1499 meetups held, while another page says 1487 meetups.

The 1500th meetup was at McGregors in Moorpark, so I had a celebratory adult beverage to celebrate the 1500 meetup. Just in case, I will also have another celebratory beer when we hit 1500 again in a few weeks. So far, I have attended a over 663 meetups according to their dodgy maths.

This weekend the group passed another milestone. The group now has over 900 members. Welcome folks.

I recently changed the questions posed to people joining the meetup group. How are new members finding out about the Meetup? Was it through this website, Instagram, Reddit, Facebook, or through Meetup itself. So far, all of the new members have declared that they found out about the group from meetup alone. Weird, eh?

Top Billing on the events board 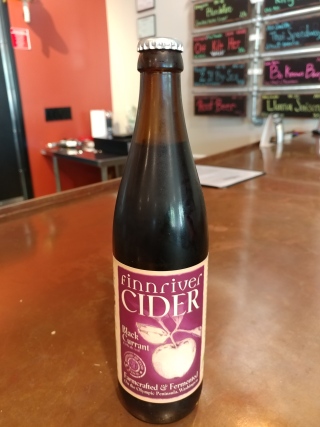 McGregors was chosen as it has all the attributes of a good public gaming location. It is clean, and bright; there are plenty of large normal-height tables. It serves beer, wine, and bar friendly snack foods. Having plenty of parking is a big plus.

As it was a public event I am expecting, and hoping, that some of the bars patrons would join in with the games. In reality, we had a few interested patrons looking at the games, and asking a few questions.

The cheese and meat plate are not part of the game 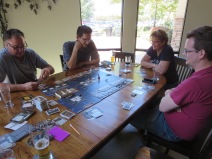 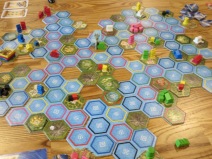 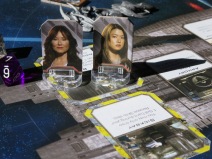 Beer is a concept

As an introductory game we played several rounds of Concept, both as a warm up game, and as a closer to wind down. I even got in a game of Battlestar Galactica.

We will have plenty of games at hand as we were not sure what types of gamers we would have attending. It is always best to be prepared with a mixture of games, both in game length, and in complexity. With 8 people gathered around a big table we broke out Ca$h n Guns as a ice breaker. Soon people settled into a mixture of longer, and more involved games.

In total we had 17 people actually play the games, two were newcomers to the group. The event was a success, and everyone had good things to say about the location. I had expected more newcomers, but I am happy with the way the event went overall.

I was introduced to a young lad called Calvin, from the nearby Game Development Meetup group. They hold monthly events to create, collaborate and develop games.

Let me know if you have an ideas, or suggestions, for the next McGregors event. I am thinking it could be a monthly event. Is Sunday the best day for such an event ?

This Sunday, the Ventura County Strategy Boardgamers are holding an event at McGregors Craft Beer & Wine, in Moorpark, CA from 2pm-8pm.

McGregors was chosen as it has all the attributes of a good public gaming location. It is clean, and bright, has lots of free parking, there are plenty of large tables, and it serves beer, and beer friendly snack food. And wine too.

As this is a public event I am expecting, and hoping, that some of the bars patrons will join in. We will have plenty of games that are suitable for non-gamers to play. Games that are quicker, and lighter, to get them hooked. Mwhhahhaa.

As part of an ongoing process I have started to collate my list of useful game links.

While looking for some other photos, I found a bunch from the special one-day events that I help to organize back in 2012. A a tease here is a montage for our first FATDOG event. The full article can be found here.

As part of my ongoing goal of increasing the number of gamers, and game groups, who log their game plays. I had added a thread to BGG with a few polls.  From that feedback it looks like lots of people are logging their games played. There are many detractors, yet so far I have only convinced 1 (one) gamer to start logging. Success!

Last night I played some games for the first time in over 5 years.

After playing the new game Clank!. I agreed to play Eminent Domain, a space theme civilization deck building game. After that time was running short so we needed something quick and easy. Jon suggested the bluffing party game called Skull. I soon realized that although I own all of these games. It had been years since I I had not played the latter two games.

Eminent Domain, with two expansions, is an evolved game. With so long having elapsed since I last played I knew I needed help with both the rules and the strategy. Ted and Jon were past-masters at the game so they helped answer questions once we got going. It did not matter to me that I was not going to win. Just trying to get some synergy in my strategy was enough for me. While mostly ignoring what Ted and Jon were doing; Alan, John and myself competed in our own 2nd tier contest. Even before the game had ended I was itching to drag out my copy of the game, read the rules and play it again. Perhaps I should not wait 5 years before I play it again. Luckily, that will not be a problem as Eminent Domain is one of the regular games in my local gaming group.

The game called Skull was fast light and fun. This was a good game to round out the evening. Despite the long time since I had last played I still sort-of remembered the rules, and (more importantly) I had a grasp of the fundamentals of the bluffing strategy required. The 5 people playing were all long time gaming opponents which meant the table talk was rather lively. Some of the other gamers gathered around to watch the game and listen to our banter.

There is little in common between these two games. To master Eminent Domain it would need many plays to develop effective strategies. Regular plays are required to learn all the possibilities within the many cards within the game. On the other hand, Skull is quick to teach and relies more on reading people than understanding detailed game mechanics.

This made me reflect on my own game replay habits, and that of my local gaming groups.

My local gaming group, the Ventura County Strategy Boardgamers Meetup  have been holding a game night on Tuesday nights since early 2010. From a few people meeting in a Borders Books the group has flourished into a large and active group that has held over 1100 meetups. Currently 2-3 meetups per week are being held across different locations. Many gamers attend more than one of these weekly meetups, yet each meetup location seems to have developed their own game preferences.
For a many years the most regular game on Tuesday nights has been Battlestar Galactica (BSG) by Fantasy Flight Games  It is no surprise to have 2-3 games of BSG being played during an evening session. Almost by accident, BSG had evolved into one of the go-to games for the Tuesday night group. This go me thinking about some of the other go-to games in my gaming circles
The current go-to games across a number of game groups that I frequent include:

That is quite a variety of games.

Having a number of go-to games has proven to be useful in all of the groups. Having variety in your go-to games allow the players some choice in what to play. The available time, and number of players are major factors in choosing which games to play.

Here are some advantages of having go-to games in your gaming circles. These are  especially advantages for the more evolved, longer games.

Repetition is good for newcomers

It is hard to remember what it is like to be a new gamer. Gazing with wonder at stacks of snazzy game boxes filled with counters, cards, and meeples. Old hands introduce you to a game about something where you need to earn some fancy mechanic called worker placement, and there are cards and cubes everywhere. Just when you get the hang of it, the game is over. And may never see that game again.
Compared to experienced gamers, newcomers to gaming need more repeat plays for the game to sink in. Newcomers have to learn a myriad of new game terminology and game concepts. Simply playing the game well takes practice. Experienced gamers are quicker to look past the game mechanics and see strategies. Put yourself
Please take that into account when suggesting games to newcomers. It is more satisfying for all the gamers in a group that the newcomers find their feet quickly. I believe this helped by regular, repeat play of go-to games.

My resolution is this: I will add more go-to games to my own game choices. This may mean I play BSG a little less often. I will ensure that newcomers are exposed to more go-to games.
Tim
8th March 2017
Eminent Domain is pictured top.