Last night was the regular Tuesday night VCSB Meetup in Newbury Park. The Tuesday night group has it’s own, shall we say, personality when it comes to how games are chosen, and the players organize themselves into those games. Other games, such as the ongoing Pandemic Legacy Season 2, were setup and ready to go as soon as the full crew arrived. I have been itching to get London, by Martin Wallace of Treefrog Games, on the table for sometime.  While waiting for Ryan to arrive I could setup the game and familiarize myself with the rules differences compared to London (Second Edition). 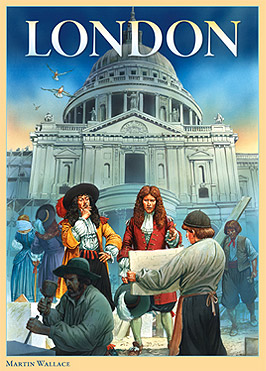 It was a good plan, then fate intervened. More people turned up late, too many for the four player London that was already setup and ready to rock. Not only that, but one of the game-less players would not enjoy playing a game like London. It is too much dry for him. The game tempo is too slow, and the mechanics too subtle; he likes games with more drama and action.

Game Organizer Tip: Don’t be afraid to tell a gamer that you think a game is not suitable for them. Back up the opinion with sound reasoning, and tell people your opinion. People usually like the honesty. If they insist on playing the game, so be it. Honesty counts.

We had to re-jiggle the games. Two went off to play Star Realms, while three of us carried on with London.

London is a crafty game. It breaks one major convention of game mechanics. Among other things, in London having too many cards is bad. You cannot simply discard cards. Having too few cards can also be bad as it is inefficient. You need to have just the right number of cards, at the right time. It’s a tough game. It’s an intriguing game. I like it. It was good to introduce the game to new people. That was one well received game that was designed by Martin Wallace …. perhaps it was time for another Wallace game.

While London is a slow tempo game with little drama. The only random element is which cards you blind draw from the deck. You have to carefully use cards to craft a tableau, while managing your money, and your poverty level. Oh, and you need to gain Victory Points too. How else are you going to judge victory.

On the other hand Hit Z Road has player elimination.

Game Mechanics : A game with player elimination means that players can be knocked out of the game. Eliminated players take no further part in the game. This can leave people frustrated and bored while they wait for the other players to finish. This is why I do not like (many) games with player elimination. Playing games is supposed to be a fun, and social time. It sucks if people get excluded from that experience.

When trying to describe Hit Z Road it is wise to not simply label the game as a zombie game. It is an auction based resource management game with dice …and zombies… and player elimination. It is such a contrast to London. It is a push your luck game with the dice. It has drama. It has tension. More importantly, it is each player for themselves.

Luckily, in this game, only one of the tree players was eliminated. Even better Joe was eliminated in the last round before the end of the game, so no real harm done. More surprisingly Jon was down to his last survivor, from an original party of five, and somehow managed to survive. Well done Jon.

Due to the delayed start we had just over 30 minutes to go and around ten people ready for another game. It was time for Codenames, one of our go-to closer games.

Codenames is a game that works with newcomers, the rules are simple to comprehend for most of the players. People can come and go, joining or leaving the game with little effect. This makes for  a fast and flexible game for beginners, and experienced, gamers alike. Now there is one caveat to Codenames being a great beginner friendly game. Codenames is a game of two halves.  The halves are the clue-givers versus the guessers. The clue-givers have rules to follow, and they have to think up the clues. They have it tough. Often, at the end of a long day, I am not in the mood to use that much brain power. Luckily there are always enough volunteers to be the clue-givers. I can then switch my brain into heckle mode, and simply enjoy being part of a team.

Codenames  : When introducing Codenames to a crowd of newcomers; let experienced Codenames players act as the clue-givers at the start. This ensures the game is up and running quickly, and smoothly. The rules on being a clue-giver are more involved, yet they can be explained during the periods of inevitable downtime while the clue-givers concoct their clues. Keep with game fast and fun, and the newcomers can learn from more experienced players.

With two game of Codenames completed it was time to end another Tuesday night of gaming. Later that day I logged the game plays into BGG. It was then that I discovered that I had now logged 100 games of Codenames since I first played the game in August of 2015.  Here is to many more fun games.