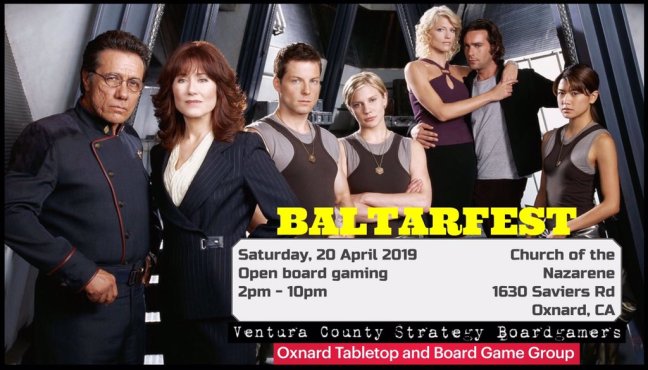 This coming Saturday, 20th of April 2019, I will hopefully reach the milestone of my 600th play of the Battlestar Galactica board game. This figure has been a long time coming. It also is a reflection on how a board game group evolves over time.

My copy of Battlestar Galactica (aka BSG) was first played on the 28th November 2008 at LosCon #35, a annual science fiction contention, in Los Angeles. Over the next 4 years I played the game regularly, but not excessively. By 2012, I began to play it more often with my local Tuesday night Ventura County Strategy Boardgamers Meetup group. I was getting close to my 100th game played.

BALTARFEST 2012 was held on the 11th of November 2012. That day we played BSG a total of 9 times. I got to play BSG a total of three times that day. Three times in one day, that seems excessive. Hold that thought!

The game plays accumulate fast when you are playing two, three, or even four games of BSG a week. We had a regular group that played BSG a lot. BSG became a go-to game for Tuesday nights. We knew how to play and we could play fast. By FATDOG 2015 I had reached a total of 400 game plays. BSG was a familiar game on Tuesday nights and other gaming events.

The first 100 game plays took 6 years. The next 300 games took a mere 3 years to accumulate. I have played BSG 5 times in a single day on several occasions. I have even played 4 times in one evening. To be honest, playing 4-5 times in one day is quite mentally exhausting. The games just merge together into one.

The last 200 games have taken 3.5 years. The rate of games played has noticeably dropped. It seems that BSG had peaked as a board game in my playlist. Why is that? Had I begun to tire of being a cylon? Not at all. The game is still fun to play. The game is still a challenge. The player interaction is still thrilling. The truth was it was just harder to find others who were able or wanted to play. For some their lives have moved on and folks have moved away. The game is hard to learn too. We play with a mix of the base game and the three expansions. We play fast. It is hard for a newcomer to keep up with us at times. It has become harder to get the 5 experienced players together that is the optimum number for a game. The BSG base game and the three expansion modules are now long out-of-print and so there are less new people discovering the game. I have played BSG only 5 times this year, so far. Our regular group is meeting, just not as often. BSG is a still a great game but I do like to play other games too.

How do I have all these stats and information of how, where, and with who I have played BSG? Simple, I log my game plays on the BoardGameGeek website. See here for my article on why this logging of game plays is a good thing.

On a side note: I have to make a shout out to Ryan for arranging our venue for so many events. Many thanks for being a good sport. Btw, that certificate that exempts you from playing BSG has long expired at the end of 2017. See the pic below for proof.

Looking back at these photos I see a lot of great people that I have come to know solely because of board games. A wide range of ages, races, and professions, where the only thing we have in common is sharing a fun time over a table playing a game or two. I would not have missed these moments for anything. I hope to see my many cylon mates again soon. To share the challenge of being all sneaky and devious together.

So say we all.

P.S. We will be playing lots of different board and card games at BALTARFEST 2019, not just Battlestar Galactica. You can RSVP for free on Meetup at the this link.