After Action Report on FATDOG 2017

Fresh on the heels of Thanksgiving Thursday was a full DOG (aka a Day Of Gaming) in Ventura. This was the 6th FATDOG event we have held since 2012. FATDOG means Friday After Thanksgiving Day Of Gaming. Twelve hours of tabletop gaming lay ahead. Many thanks to Ryan for all of his hard work making this year event such a success. 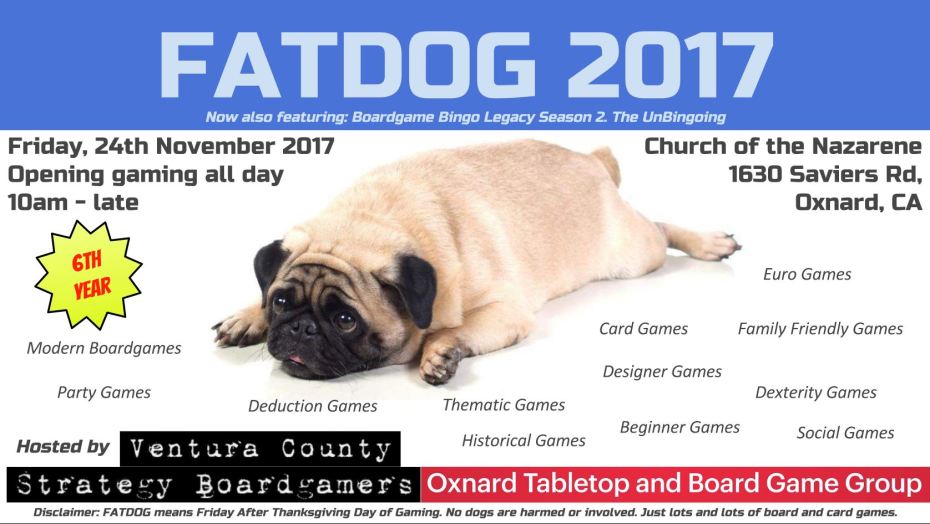 With up to 12 hours of gaming ahead we would get a mix of long and short games. Some people would arrive early, and stay the whole day; while others would come and go. As you can see from the list of games played they was a wide variety of cardboard that hit the table. 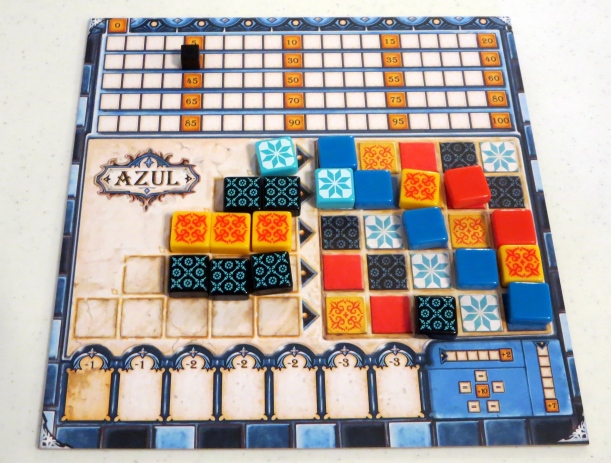 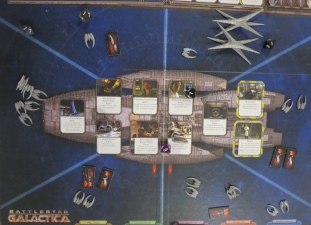 The Cylon Raider take out may civvy ships. Game Over. 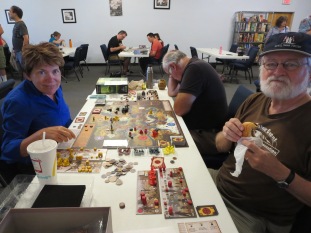 More Oracle of Delphi with Joe, Greg, and Richard

The dexterity game with a twist: Rampage

Late in the day, the lads play Wizard

One feature of our recent DOGs (Days of Gaming) have been the Raffle Bingo. After trying some different methods we have found the best combination. Players fill out their bingo cards with the games they have played. More games played means more squares crossed off. More bingo squares means more Raffle tickets to win more games. As the gaming is going on I am wandering around giving out Raffle tickets in preparation for the Prize Draw after 6pm. I especially like giving out discretionary tickets to award good sportsmanship, or for those playing fewer, but longer games.
The group members themselves had donated new, and almost new games as prizes for the draw. We had some great games as prizes that rightfully attracted lots of tickets. 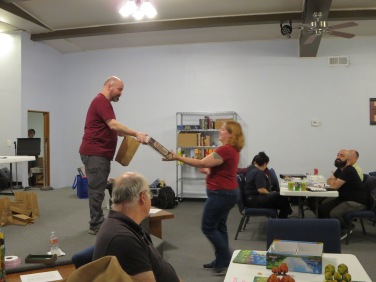 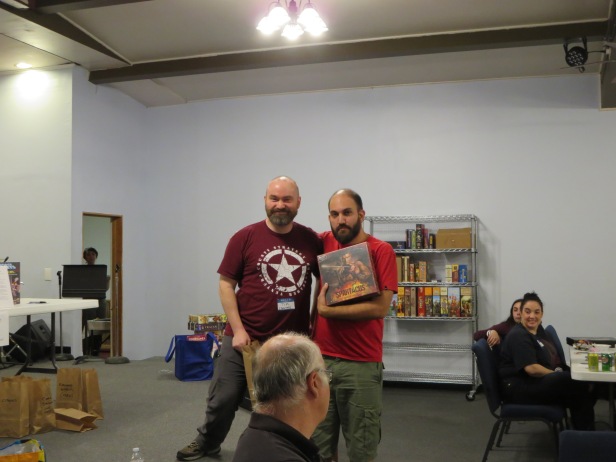 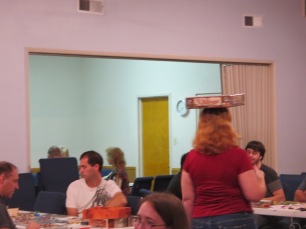 Lisa won Pandemic, and the On The Brink expansion 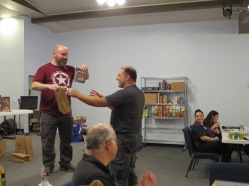 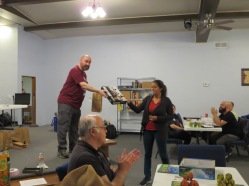 The Walking Dead game was a prize

April-Lyn won Space Cadets in the FATDOG 2017 Raffle Bingo. She played the game the very next day at DOGCAT 2.

The important question was not if, but how many, games of Battlestar Galactica would get played that day. Dodgy John was already itching to play, and he had brought along Josh Brown too. After recruiting Sudro and Kimberly we had a BSG game with three players called Brown. That must be a good omen, right? After the Sleeper phase I acted all cylony as President Baltar when I lost some valuable Fuel. It was the tipping point for me as Cally had the final option with her unique ability. It would probably be myself, or the slowcoach Admiral Cain, getting the chop depending on which side Cally was on. It was me getting the bullet, so off I went to the resurrection ship. The humans Blind Jumped to 7 distance allowing myself and Cylon Josh plenty of time to deal with all of the pesky human civilian population. So say we all.

For the next Battlestar Galactica we roped in Ben for hopefully the first of many games of BSG. It is a regular game on Tuesday nights so recruiting another possible player is always a good idea. This second game did not end well for my fellow humans. I frankly cannot remember the details of how we lost, a common problem after two consecutive long days of gaming on Friday and Saturday.

Codenames was a popular game with at least 10 games played across the day. Six of us gathered in a quieter room for a game, recruiting another player along the way. My team had some great clue givers, and we had two solid victories.

With the day turning into evening we gathered for Clank! This has been a regular and popular game for experienced gamers and new gamers alike. Three of the four players got very noisy. We stopped acquiring cards from the Dungeon Row as three of us could not risk the damage. The only quiet player was Kyle who would eventually grab victory with an impressive 115 points. My gf would squee with joy when she drew enough cubes from the bag to knock out both Sudro and myself in the same draw. I was one space away from leaving the depths, so I scored zero points. Good game.

My last game was another game of Codenames when I joined in with a big 10-ish player game. Our cluegiver Ron likes to give expansive clues that match many cards, like soldier 7. After listening to our table talk he was forced to deliver the clue of rectangle zero to stop us from picking the word square. With that smart play it was another Codenames win for my team.

It’s good to be a cylon in BSG

The sum of the card in BSG was zero, due to Red Tape 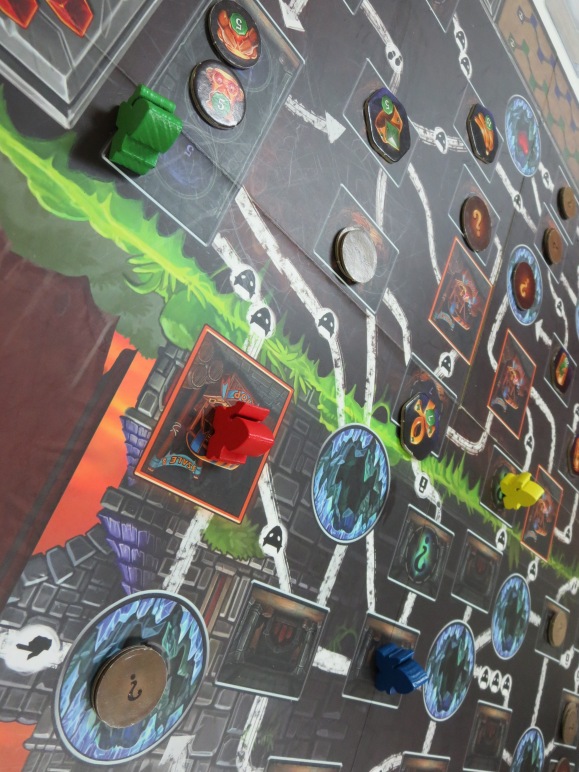 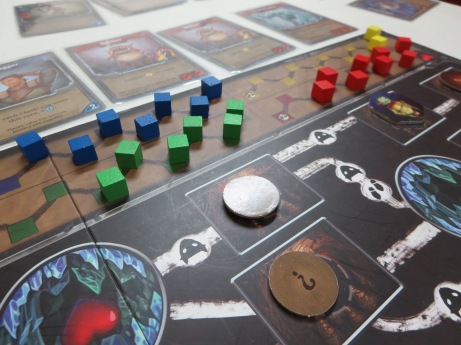 Kyle (yellow) was the only quiet one in Clank!

Christieann knocked out both Sudro, and myself, in one turn in Clank!

Another Successful FATDOG Was Over

With lots of tables being packed up, and the chairs rearranged we soon drew to the end of another successful FATDOG. We had 45-50 in attendance across the day. We meet some new gamers, and saw some others that we don’t see very often. All in all it was a great DOG. Woof!

Last but not least, there were the baked goods that people brought along to share. Many thanks to all who took part in FATDOG 2017. 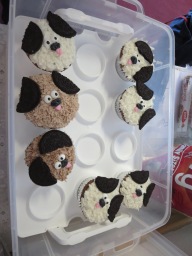 Thanks to David for bring the goodies