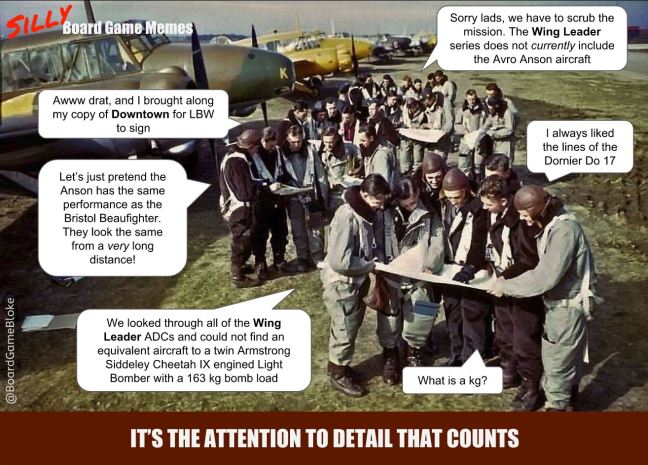 Tanks and aircraft are two things where I adore the minutia of detail. The subtleties between opposing machines, and even between different versions of the same machine, have captivated me since I was a small boy. I like games that include that detail, yet without the detail becoming a drag. I want to play the game without having to fight the game system or the laws of physics.

The first air combat game I played that had oodles of detail was Air Force by Avalon Hill. All of those lovely detailed and colorful data cards on a myriad of aircraft. I ogled those data cards for all of their tech-laden goodness. I loved the detail even though I sucked at the game.

The game that re-awoke that desire for detail in air combat was the Wing Leader series of ww2 air combat. This game, and many other  innovative air combat games was designed by Lee Brimmicombe-Wood and published by GMT Games.

In the Wing Leader series the detail was there without the cost in complexity. Complexity is often the first casualty of a highly detailed game. Time and complexity can mean you spend hours fighting a few minutes of elapsed time. The revelation for me was that the details between the different aircraft still counted, yet so did the tactical factors such as position, height, pilot experience, and aircrew training. The scale used was the difference. It was no longer individual aircraft zooming around the sky,  it was flights and squadrons of aircraft.

The Wing Leader series had enough aircraft detail to satisfy that itch and the aircrew themselves have enough variables to get me rooting for a individual Ace or favorite squadron. Along with a myriad of different aircraft types and marks there are were tactical choices that I had not seen in other games. The vertical aspect now mattered more than ever before without the mechanics of diving and climbing becoming a bind; The quality and doctrine of the aircrew mattered. Good tactics seemed to pay off at last. Boom and zoom attacks were so much easier to perform without worrying about throttle settings or wing loading. That was perfect for me.

I have to include a shout out to J.D. Webster for the Fighting Wings series etc. This is great for the aircraft tech-head. By the way, I suck at this type of air combat game. It was like playing Air Force all over again. I would always overshot the target due to a misjudged turn and then present a perfect target for the enemy.  The lesson seemed to be that I am better at commanding a few squadrons rather than individual aircraft. For individual aircraft combat I think I should stick to the simpler air combat games such as Down In Flames or Wings Of Glory.

Through Wing Leader, my dreams of ww2 aerial glory can come true at last. From squadrons of Spits and Hurricanes piloted by the plucky RAF, to hordes of Me-109s and Focke- Wulfs diving into formations of B-17s. The Wing Leader series has it all, except for the Avro Anson of course.