This post is about a few of the people whom I game with.

Saturday was a regular get together at Game Empire with my wargamer mates; the SoCal Wargamers. We played a bunch of games, both old and new. After some games new to us: South China Sea, and Chile 73, it was not surprising that we next played a game that felt like a old comfy pair of slippers. Like a lot of gaming groups we do like to play new games, yet we also have our old standards that we can quickly jump into. One of these standards is Napoleonic Wars by GMT Games. This game is fondly known as Nappy Wars. It is a 2-5 player strategic card-driven game on the Napoleonic Wars from 1804 to 1815. 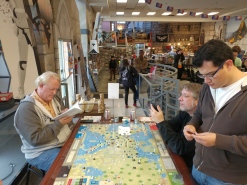 Europe is giving us mixed signals whether the Napoleonic Wars should end. 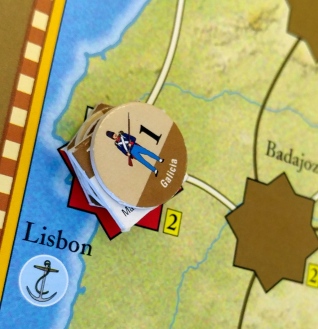 Lisbon has fallen to the Spanish in Napoleonic Wars 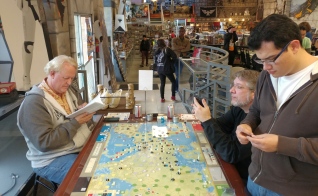 One of our regular Nappy Wars players is Greg Ticer. Among other things, Greg has given us a better understanding of how to play Nappy Wars. A game that I have played at least 30-40 times. This is because Greg has designed a game of his own, called The Seven Years War: Frederick’s Gamble, that is loosely based on Nappy Wars. In the process of adapting the Nappy Wars system it meant that Greg had to gain a full understanding of the rules. In the process Greg had found that we have been playing the game slightly wrong for.. well, for always. Oops. Thanks for pointing that out Greg!

Sadly, Greg will soon be moving to Texas. That Saturday was probably our last gaming session with Greg for a while. We have shared many fun times with Greg. He is always a serious gamer, yet he has a jovial side. Here are some pics that show his jovial nature. He had ordered the large burrito at a local Mexican cantina while we were at SDHIST Con 2016 in San Diego. The burrito was somewhat larger than anyone expected. It was so big that it overlapped the plate on both sides. Greg’s face is an absolute picture as he contemplated the behemoth that he was about to consume. He barely made a dent in the monster, and could not give the rest away. That was a lot of burrito for 10 bucks. 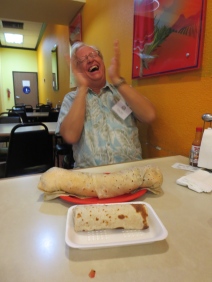 So we give our best wishes to Greg on his new adventures. May the dice roll high or low as appropriate. We hope to game with you again soon.

{shill} Check out Greg’s game, entitled The Seven Years War: Frederick’s Gamble. The game is on P500 preorder by publisher GMT Games. I wish Greg had stuck with the original title that I suggested aka “Greg’s Awesome Sauce 7 Years War Game“. That’s a snappy title, don’t you think? {end shill}

Monday night was at McGregors, in Moorpark. This weekly event has been going from strength to strength since it was first started just over 6 months ago. The core of the attendees on these Monday nights are old time VCSB regulars that I have known for years. It may take some time to get the word out to the locals so you have to persevere. The expectation, when launching a new event in a new area, is that we get some new locals to sign up.  A new event takes some time to get enough momentum to be self sustaining. It is a definite help when some of these new local people become regular attendees. It was good to meet Paul. Paul is a Moorpark local who quickly became a regular attendee.  Recently it has become clear that Paul has a game-crush. He has become smitten with a game about Vikings, namely Raiders Of The North Sea.

Don’t get me wrong. Paul is not the first gamer who has been smitten by a game. I have seen many a gamer fixated on a game. Some would jokingly point out my fixation with Battlestar Galactica. There will be more on BSG later.

Raiders Of The North Sea with expansions 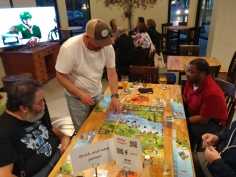 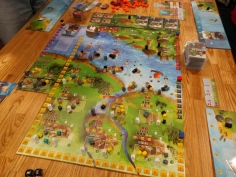 Raiders Of The North Sea: Base game and two expansions

What is great about this fixation is there is a genuine passion for a well crafted game. A game that both intrigues and entertains the player. A key element in spreading the joy of modern board games is to have genuine enthusiasm for the games. Genuine enthusiasm shows through and draws in the other players. It is great to see that enthusiasm in Paul. Well done that man.

A recent newcomer to the VCSB group, and to modern board games as well, is Brook. As the group organizer I act as gate keeper for the newcomers. I do my utmost to ensure that newcomers feel welcome. I also ensure the newcomers get into appropriate games, and by appropriate I mean that I try to gauge the persons game knowledge, interests, and their abilities to ensure they don’t get placed in a game that is a poor choice for them. Letting the person know the expected duration of a game, or how complicated it is, is only fair in case that does not suit them. On the odd occasion I have strongly suggested that a player should not play a specific game, as the game would not suit them. Over a few events you can begin to determine the newcomers likes, dislikes, and limitations. Now Brook has lapped up every game that has been thrown at him. From simple party games through to complicated strategy games he has taken them all in his stride.

I recently revisited the first edition of the game London. This game took a few plays before I got the game.  Others experienced gamers have struggled to play the game well in the first attempt. Brook, on the other hand, demolished us in his first play. On Monday night Brook expressed an interest in learning to play Battlestar Galactica.

For the last few weeks we have held the Tuesday Night VCSB Meetup at Ted’s house in Newbury Park. We are limited to a maximum of 24 while at Ted’s place. There is just not enough space to cram in more people without being overcrowded. We have even had to turn people away; which is something that I hate to do. Having a smaller attendance means it is harder to get the 5 players that is optimal for a game of BSG (Battlestar Galactica). Luckily there was fresh meat Brook who wanted to learn the game. Mwwhhhaaa. We had a fresh victim for the airlock. So Say We All.

BSG is not an easy game to explain, nor is it an quick and easy game to learn. Experienced players tend to have low expectations of new players. You can see where this is going. Early in the game there was a Skill Check that was obviously sabotaged by a unrevealed cylon. More importantly, it was not sabotaged by me, and I was the other unrevealed cylon. Although I had played a card into the Skill Check I could prove it was not sabotaged by me. Human Eric helpfully backed up my story. It was now that the game took an interesting course. Experienced players Chris, and Dodgy John, immediately started to blame each other. Each were convinced the other was the cylon who had sabotaged the Skill Check. I was not sure which one of them was on my side, I was quite convinced it was one of those two. Our deliberations were so passionate that we were told to keep the noise down. The game effectively stopped for 10 minutes while people argued back and forth. Then fate intervened and I got thrown in the brig under the premise that I could have determined who the cylon was, and I did not do so. Later in the game it was clear that both John and Chris were human, along with the innocent Eric. For a while the table was convinced that I was the lone cylon. In fact, I was not alone. It was Brook who had sabotaged the Skill Check. No one had suspected him. Not even me. Inexperienced players are never so sneaky, so quickly.  How he kept a straight face through all of this, I do not know. Well done Brook.

I think we need to launch a Rescue Mission

I may be a cylon

Party in the brig

My last game of the night was The Mind. A game that is not yet released in the USA. Here two people, both I have known for ten or more years, come into play. First, Jennifer posted that she thought The Mind was the stupidest game ever. This brash statement meant that Jonathon had to check the game out for himself. As the game is not yet available he had to concoct a version using the cards from another game. 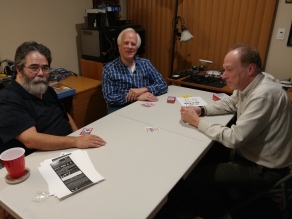 Four old duffers playing The Mind. I am out of shot taking the piccie.

Jennifer’s opinion of The Mind 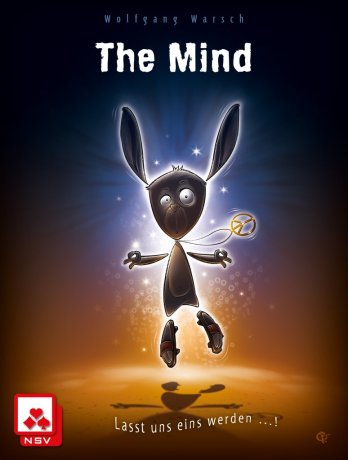 It is a stupid game.

It is a fun and stupid game.

It is a fun and stupid game, where we had four grown men grunting, wincing, and laughing at each other. We played The Mind twice. We lost twice. That did not matter as we had fun. Thanks to Jonathon for introducing me to a stupid game.