Skip to content
Last month I decided to see how many consecutive days could go by where I played at least one boardgame each day. All the games were face-to-face with human players, and with the actual physical games. No online or app plays counted towards the totals. No children were used nor harmed in this endeavor.
Yesterday I hit the milestone of 100 games played over 31 consecutive days. This is with over 89 gamers in 11 different locations. This info was supplied by the BGStats app, and the BoardGameGeek website. 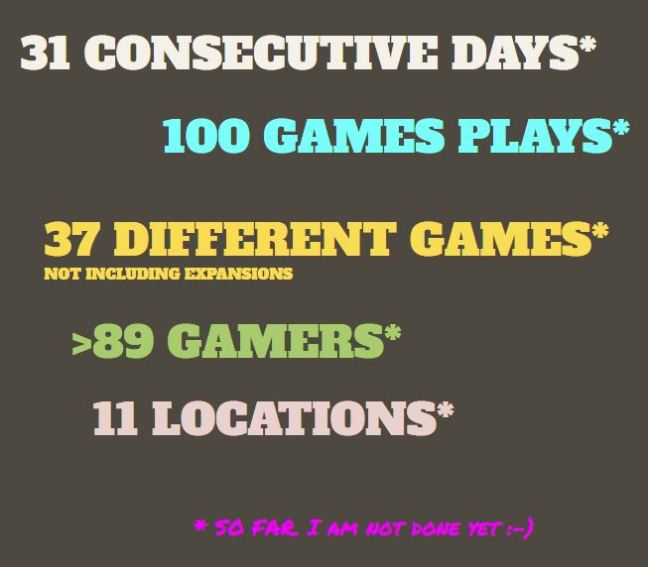 The feat of cardboard exploitation started by accident when I noticed that my local gaming group had gaming events over 5 consecutive days. It was made easier as I was also attending two gaming conventions on consecutive weekends. The big boost is that I am lucky to have a very active local gaming scene. Here is a shameless plug for my local Meetup group. I am the main organizer of the VCSB Meetup group and we meet around 4-5 times a week.

This still left some event free days. My long suffering gf has helped to fill in some gaps in the calendar. Being a sneaky person, I have used this as an opportunity to introduce her to some new games. Mwwhhahha. I was quite proud when she beat me at 7 Wonders Duel the other night. She was also very happy that she did not need to feed her people in that game. She hates Stone Age. 😦
The shortest game play in time was either Rhino Hero or Qwixx. Some of those games took only a few minutes. The longest game play was 12 hours playing Here I Stand (500th Anniversary Edition) with 5 other players. Some of the games were playtest games of games yet to be published. For purely social games like Concept; the one game play logged consisted of at least a dozen rounds.
My game plays are logged via the BoardGameGeeek website or the BGStats app. I have used both BGG, BGstats and the friendlessstats website to look at the game play data.
It is fair to admit that I am a tad OCD when it comes to logging my plays. I have been logging my game plays for just over 10 years. So far I have logged over 3800 game plays of over 600 different games.
My total game play H-Index is 27. That means that I have played 27 games a total of 27 times each. For more details about logging game plays please see this article https://venturacountyboardgamers.com/articles/logging-your-game-plays/
This game playing streak has helped towards my Twisted 10×10 Challenge for 2017.
This year is looking to be a good year of gaming. One of my goals for the 10×10 Challenge was to increase the number of games that I played for two specific areas. These were firstly games that are published by GMT Games. I felt that I was not playing there games often enough. Secondly, I wanted to play more wargames (aka historical themed) games by publishers other than GMT Games. SO far I have met, and exceeded my goal. The 10×10 Challenge caused me to review my game playing patterns. It is easier to play non-wargames, as there are more people who are willing to play eurogames.
By the way, I am gaming tonight. The streak continues!
My username on BoardGameGeek is oi_you_nutter. You can see my game information in my profile. Let me know if you have questions on game logging, or any questions about my sanity, or the games that I play.
Tim
24th October 2017