It is frustrating when people show up late, and people are already firmly set into long games. It’s frustrating for me as a group organizer, and I know it’s annoying for those who rushed to get there, and then find it is hurry up and wait. Wait until a game finishes, or hope someone else turns up late too. Even worse than that is when people stop showing up if they think that arriving late will not allow them to get into a game.

The staggered/delayed start was implemented for the first time on Tuesday night. To understand the problem, see a previous blog post. Basically, some people were having a problem getting to the meetup for an earlier start time of 6:00pm. With 28 in attendance this Tuesday, compared to 21 last week, I regard that as a promising increase in numbers. At least 4 people said they could benefit by having the option to start a little later. The key to making it work is communication, it’s people letting the rest of us know that they will be arriving later than the 6:00pm normal start time. 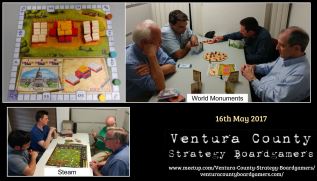 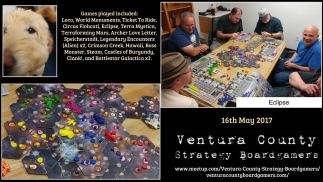 The expected side effect of delaying our start of Battlestar Galactica was that we had a full quorum. We had an option to play 5 or 6 player. We went with the 5 experienced players.  BSG is a tough, and time consuming, game to teach. So we were happy to crack on, and simply start playing with the experienced players. BSG is one of the go-to games on a Tuesday night, a familiar friend that allows people to simply play the game without fuss, or delay.

Both myself and Dodgy John, were cylons in both games. We won both games too. In the first game it was obvious that Morale was the Resource to target. That allows you to focus on lowering that Resource. In the second game, however, there were multiple paths to victory. There were multiple Centurions on the boarding track, Galactica was suffering from damage, the Resources were getting hit, and there were plenty of cylon Raiders milling around Galactica itself. This is one of the reasons why BSG is such an engaging game. Whether you are a human, or a cylon, each player must decide what is the priority, both in the short term, and the log term. Ignore the wrong thing and it could be disaster for your side. Sometimes, discussing the threats, and openly co-operating is a good idea. In other times you do not want to reveal your options to the other side. This is especially so when you do not know the allegiance of the other players. Paranoia over who you can trust is a key part of the game.

With multiple threats to the humans, each of them had a possibility to bring victory to the cylons. What does a cylon do ? You have to weigh up the choices to see what strategy, or strategies, are most likely to work. This is where you have to use your experience of the game, coupled with the current game state, and analyze the characters around the table to make your choice. Then you do all you can to make it work for your side.

With lot’s of cylon Raiders around Galactica, 18 to be precise, we went for causing damage on Galactica: I rolled the d8 (the game uses only eight sided dice) the required 18 times. Each 8 rolled would cause Damage on Galactica. I rolled zero (0) 8’s on 18 dice. I laughed, the other players laughed. John, my fellow cylon, exclaimed about how useless I was. He then rolled the same number of dice, and got four 8’s. Human Mike, playing the Chief character negated two of the four 8’s by playing Calculations cards from his hand. Galactica was still alive, but only just.

The cylons still won the game, we advanced the Centurions and vented the atmosphere of Galactica. The humans needed air, they had none.

I am ok with that.

A new board game Meetup group has started in nearby Agoura Hills. It is called Conejo Valley Boardgames. They are meeting for the first time this coming Saturday at a cafe in Agoura Hills. The organizer, Patrick, has also signed up for next Tuesday night.